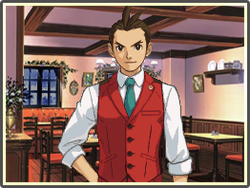 Apollo Justice is a rookie attorney with only four cases under his belt. His mentor was Kristoph Gavin, a skilled but mentally unstable defense lawyer whose pride and paranoia led him to commit multiple murders. He is now the protégé of legendary attorney Phoenix Wright. Apollo, who recently discovered that he is the son of Thalassa Gramarye, former member of a troupe of magicians, and the half-brother of Trucy Wright, Phoenix's adoptive daughter, possesses a bracelet which allows him to detect when people lie. 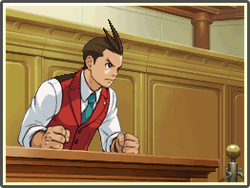 An enthusiastic, hot-tempered young man, Apollo believes in justice and is willing to make any sacrifices to get to the truth. He is an honest, down-to-earth person who shows great maturity for his age. He also has a sarcastic side, and tends to get overly emotional when things don't go his way. While his approach to his job is slightly more professional than that of his role model, he is still prone to improvising and making up theories on the spot. In Turnabout Substitution, Apollo is about to discover just how difficult it is to defend the innocent all by himself with everyone conspiring against him.