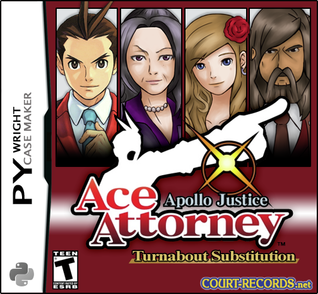 Apollo Justice Case 5: Turnabout Substitution is a fancase developed for PyWright.
The game is set shortly after "Turnabout Succession" and intends to be Apollo Justice's "Rise from the Ashes".

When the city's most famous judge gets arrested on suspicion of murdering an infamous serial killer, he has no one to turn to but rookie attorney Apollo Justice.
But is he up to the task? Can he find the truth on his own? And, above all, can he face it?
Prepare for a mind-bogglingly intricate plot filled with suspense and unsuspected twists!