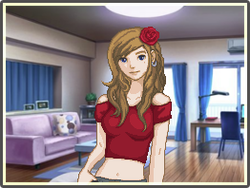 Rhea Wits is a bright and cheerful young woman who happens to work in the death industry. Her brother Nathan was brutally murdered by an infamous serial murderer, the "Mysterious Bust Killer", and she had to testify in the trial of the alleged culprit, Robert Erlenmeyer, where she befriended Judge Chambers who like her had lost of a member of his family to the murders. When Judge is arrested for the murder of Erlenmeyer, she decides to help Apollo investigate the case, convinced that there is more to the story than meets the eye. 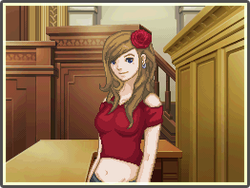 A dynamic businesswoman who seems to have everything under control, she is not afraid to show her emotions and weaknesses when she needs to. Like a lot of twenty-somethings, she still shows some childish traits and loves to talk about her various quirks and link situations to irrelevant details from her personal life. Rhea is not always as tactful as she should be, and has a penchant for dark humor typical of those in her profession. However, she is hard-working, dedicated, and quickly proves useful in the investigation.